skip to main | skip to sidebar

All available sites continue "under construction."

art6Gallery hosted David Turner's First Annual Yom Hashoah, Holocaust Remembrance Day International Exhibition in May, 2009. The exhibition included works by visual artists from around the world, the United States, and members of the local Richmond arts community. A memorial to the past, the exhibition was a testament to the resilience and survival of a people persecuted for two thousand years, still proudly insisting on their future. The exhibition included works by artists living as well as dead, those who directly experienced the Holocaust and those who did not: yet all survivors. Only the accident of country of residence distinguishing the two.
Special thanks to Jay Ipson, founder and Director of Virginia Holocaust Museum, for making available materials from the museum's archives, and also to Weinstein Jewish Community Center for their support and assistance.
.
Defiant Silence, Never Forget!
First Annual Yom HaShoah, Holocaust Remembrance International Exhibition
. 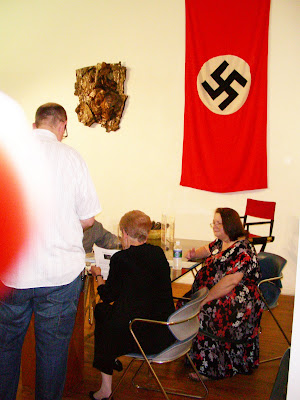 Entrance to the exhibition
. 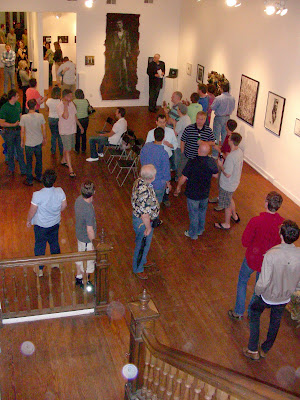 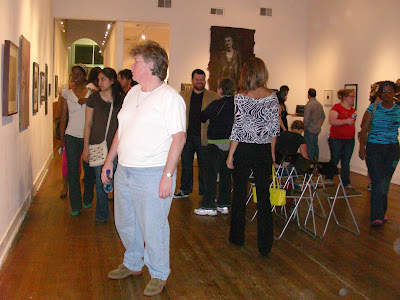 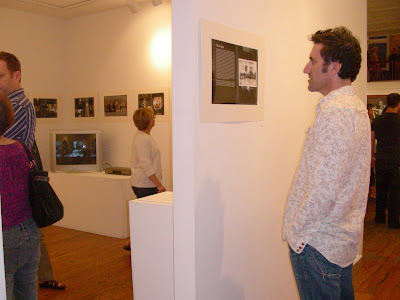 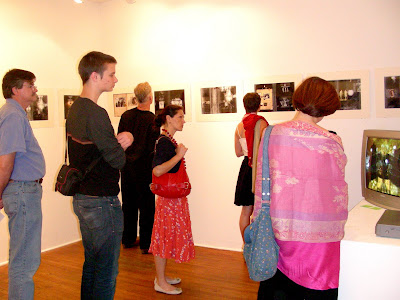 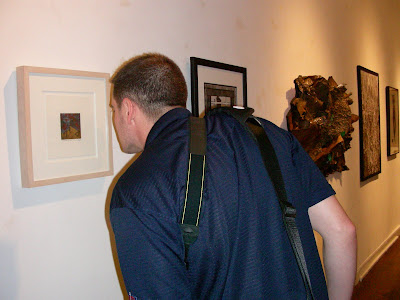 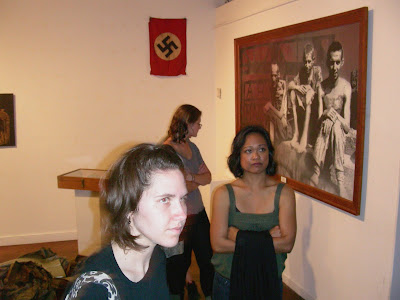 The image to the right is Dachau, one of five images in the exhibition by 18 year old Richmond artist, Joe Riley. On the wall facing the two women is a concentration camp victim's uniform. 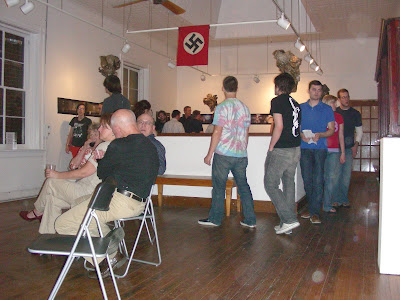 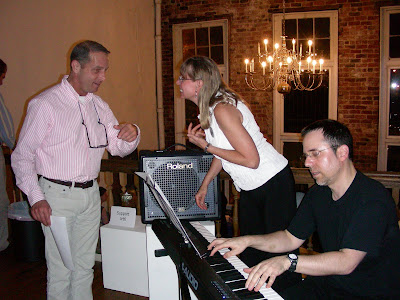 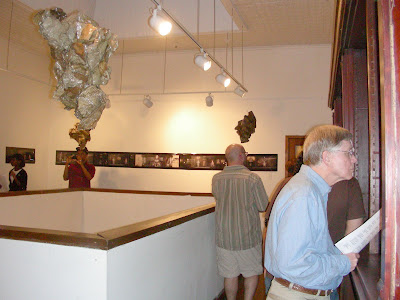 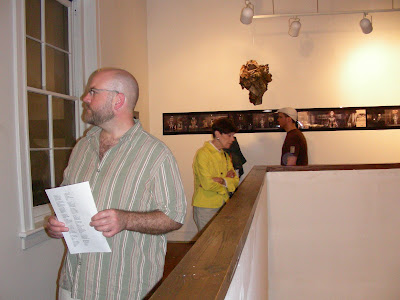 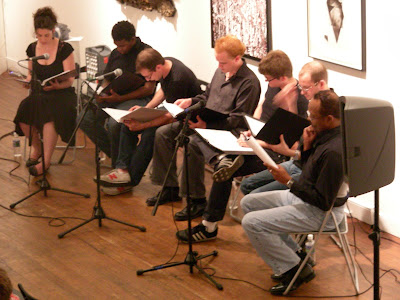 Cast of Slash Coleman's new play, Shalom Israel! premiered at art6 Gallery on 2 May, 2009. The play's name uses dark humor to portray the tragedy faced by Jews living in Paris following the German occupation. During the Holocaust years, along with the requirement that Jews display the Star of David on outer garments, they were also forced to adopt the names of "Sarah" for women, and "Israel" for men. Bonjour Israel refers to two Parisian Jews greeting each other upon meeting.
. 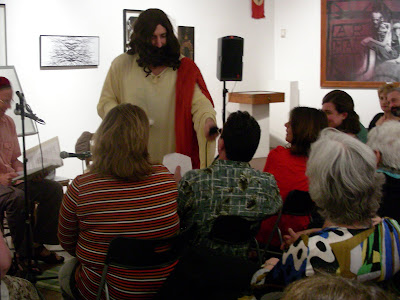 Slash in character in his Matzo Balls monologue, Saturday, 9, May.
. 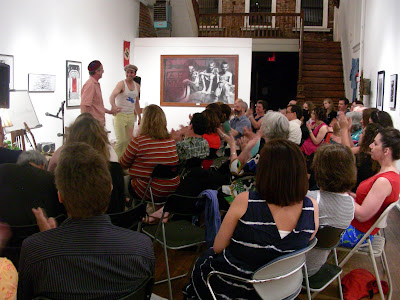 Slash and Eliezer accepting the applause of the audience, an appreciation that moments later resulted in a standing ovation.

Posted by David Turner at 2:34 PM No comments:

"One estimate suggests that had Diaspora Jewry not faced two thousand years of Christian wrath our present population would have equaled that of the entire British Isles."

Antisemitism is called The Longest Hatred. Elie Wiesel, Holocaust survivor and author, refers to Shoah as unique and “mysterious.” What purpose do such descriptions serve, what are their implications? If, for example, antisemitism has been around so long, is it a "universal,” a culturally neutral response to Jewry and Judaism? Or is the phenomenon culturally specific, the belief system of a specific group at different points in time and history? Who is responsible for holding to, or acting on that hatred; a Hitler, the German nation, European society, Christendom entire?

Is the Holocaust a mysterious and unique event in history? Or is it explicable, an event generations in the making, the heart of darkness of a religion of love and forgiveness?

Perhaps the best way to distinguish anti-Judaism/antisemitism from pre-Christian prejudice is to ask how polytheistic, pre-Christian pagan society viewed their monotheistic neighbors. To the Greeks and Romans Judaism was certainly different and strange. But so, to some extent, were the various pagan belief systems strange to each other. Jews asserted a single, an invisible deity and this, combined with dietary and other rituals, set them apart. But overall Jews as Jews living either as a state among neighboring states, or in Diaspora among polytheistic neighbors, were just another people in the mix. In fact, within the Diaspora and particularly in Rome itself, many among their pagan neighbors found Judaism attractive for its one god and its ancient history. In the decades before the destruction of the Temple many converted to the religion, while many others, the so-called “God-fearers,” chose to live as Jews without taking the final step of conversion. The appeal of Judaism even reached into the Imperial Roman household itself where history records several conversions.

It was in the Diaspora that the new and soon to break away sect of messianic Judaism, future Christianity, was to strike root.

Modern antisemitism owes its origins to the efforts of that newly-emerging sect of messianic Jews and pagan God-fearers, a sect born in the despair leading up to, and following the fall of Jerusalem and the destruction of the Temple. In an effort to distinguish itself from Judaism for purposes of legitimacy and in competition for converts, nascent Christianity exonerated Rome for the crucifixion of Jesus and placed the blame squarely on the shoulders of the Jews.

Over the past two-thousand years, with few notable exceptions, the tiny minority of Diaspora Jews living amongst their hosts were the objects of religious superstition and xenophobic prejudice. Persecuted as deicides they faced periodic episodes of community murder, were periodically expelled from their homes, their belongings and wealth confiscated. When seen as one, if the most successful event in a long and of continuous historical process, the Holocaust emerges not "mysterious” or unique, but merely the most recent in a long and continuous series of such events. If unique, then its uniqueness lay in the fact that 20th century technology provided the tools by which the final solution to the west's two-thousand year old Jewish problem was nearly achieved.

In the post-Shoah world Jewry and Christianity both prefer to view the past as Past, to deny antisemitism its historical consistency and future continuity. This makes sense since, for Christianity to accept that its theology and history are responsible for the Holocaust is to force the choice of expunging anti-Judaism from its scriptures, which would call into question their divine authorship and the very foundation of the religion’s belief system. According to Catholic theologian Rosemary Radford Ruether, “ anti-Judaism [may be] too deeply embedded in the foundations of Christianity to be rooted out entirely without destroying the entire structure” (Faith and Fratricide, 1974, p. 228).

Which leaves the easier choice, that taken by the Catholic Church in 1965. Nostre Aetate left intact the anti-Jewish references in the gospels while encouraging clergy to interpret them more moderately. But this change was cosmetic and affected little in practice: antisemitism among Catholics, and Christians in general, has increased in the decades since. What is the more important issue for Christianity is the contradiction between its profession of “love” and “acceptance” and the reality of Shoah. For how reconcile the ideal of Christian love while demonizing Jewry, asserting forgiveness while inspiring and promoting contempt and hatred in the faithful and their secular children?

For we Jews the issue is far more important since it is we who are the victims, the target of Christian fear and doubt. One estimate has it that had Jewry not been victimized by two thousand years of Christian wrath, that our present population would have equaled that of the entire British Isles. Yet we choose to live as though Shoah were unique, a mysterious event.

German Jewry was the most assimilated and intermarried community in the world. They did, and had reason to, consider their fatherland exceptional. And it was, until 1933. Jewry today, in Argentina, the United States and throughout our Christian dispersion, have the benefit of our German community’s experience. But rather than accept the significance of Shoah we choose to reinterpret, falsify and deny its implications for our self and our children. As our German relatives before us, we place comfort and convenience above the hints in our surroundings of danger. We live in awareness that another shoe, suspended in time and space, will, at a time and manner not of our control, fall. That not only our own, but the lives of our children or theirs or their children’s children will be the cost of our denial, our complacency.

Antisemitism in Art demonstrates through image and word spanning two thousand years the history of this consistent prejudice, this chronic and repetitive but hardly mysterious assault on Jews by their neighbors, friends, and even intermarried relatives. It is not a pleasant survey, intended not to entertain but to sensitize the viewer to a past, present and continuing lethal threat to all persons considered Jews even, since Hitler’s Germany, back to persons with a single Jewish grandparent.
Posted by David Turner at 5:52 PM 3 comments:

is to ensure it's future!

David Turner
was born in New York City in May, 1939, six months after Kristalnacht, Germany's massive pogrom against the Jews, and six months before the SS issued and executed the first orders singling out Polish Jewry for death. Of the more than six million Jews murdered by Europe in the years 1939- 45, more than one million were children. Had the parents or grandparents of Jews surviving today not fled Europe before the war; had Germany won that war it came so close to winning; had Hitler's idol and American industrialist Henry Ford decided to run, and won his anti-Semitic populist campaign for president of the United States would even a single Jew be alive in the world today? For David Turner Auschwitz is ever present. He sees himself not as just another American artist who matured in the shadow of The New York School; nor just an artist who happens to have been born a Jew. David sees himself, as he views every Jew alive in the wake of the Holocaust a child of Shoah. It is this awareness that defines his life, drives his work.